An overcoat with three to five cape collars popular in the 19th century and mostly worn for riding and travel–sometimes called a Garrick or coachman’s coat.

harlotte Mankey Calasibetta and Phyllis Tortora describe the carrick coat in The Fairchild Dictionary of Fashion (3rd Edition) (2002) as a cape-like duster worn by men and women:

“Man’s or woman’s full-length duster worn from 1877 on. Styled like a box coat with three capes and similar to an ulster.” (89)

Mary Picken notes in The Fashion Dictionary (1957) that carrick coats were popular in 1860s:

However, the surviving fashion plates from early 19th century suggest that carrick coats were popular even before 1860s (Figs. 2-4). The Metropolitan Museum of Art also exhibits an earlier example of a carrick coat made of wool, linen, and cotton blend and dated ca. 1812 (Fig. 1).

Patricia Hint-Hurst in Clothing and Fashion: American Fashion from Head to Toe (2015) mentions that carrick coat was known as Garrick in England:

“Cloaks and capes went by different names depending on fabric and trim. In the 1780s a pelisse was a cape trimmed with fur. By the end of the federal period women also had the option of wearing an overcoat like a man’s great coat with multiple cape collars. This coat was known as the Garrick in England.” (203) Tom Terney in Empire Fashions (2001) describes the carrick coat as the one with several capes and adds that it became popular in women’s winter garments during the Empire period:

“For winter wear there were two styles of greatcoats – the redingote, a three-quarter or full-length coat or dress, and the carrick, a garment with several capes…. French quickly adapted it, for both men and women. By the middle of the Empire period, the redingote became the vogue for women’s winter wear. It generally had several layered shoulder capes like the men’s carrick coat but was belted high beneath the bosom to follow the Empire line.” (3)

Mary Evans in Costume throughout the Ages (1960) describes what fabrics were usually used for garrick coats:

“One of the most fashionable wraps was the long mantle of velvet, trimmed in winter with an abundance of fur, and known as the garrick.” (101)

Doreen Yarwood in The Encyclopedia of World Costume (1986) provides a detailed description of the garment’s silhouette and its purpose:

“The Carrick was also a bad-weather, caped coat worn for driving and traveling. This often had two or three shoulder capes; it was double-breasted and full and was worn from the beginning of the century onwards. A feminine version of the coat was fashionable in the later part of the century. This was made of thin material and often used as a dust (duster) coat.” (308)

“In the mid-1810s, a feminine adaptation of the English coachman’s coat called carrick became widespread on the Continent. The carrick feathered layers of three to five capelets that covered the shoulders to the line of the Empire waist.” (466)

“Men’s overcoats were greatly varied in the nineteenth century. The voluminous carrick with its layers of three to five capelets and high collar was similar to the women’s version… In the 1810s, the French military great coat worn by Napoleon was widely adopted by civilians. It was simple design with ankle-length hemline, a double-breasted closure, and a high, turned-down collar. Cloaks were more commonly worn for riding and travel.” (476) 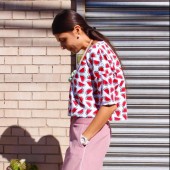 Yana Glemaud, a non-degree student at FIT, researched and wrote this while taking HA344: The History of Western Costume (Fall 2018), taught by Prof. Justine De Young.